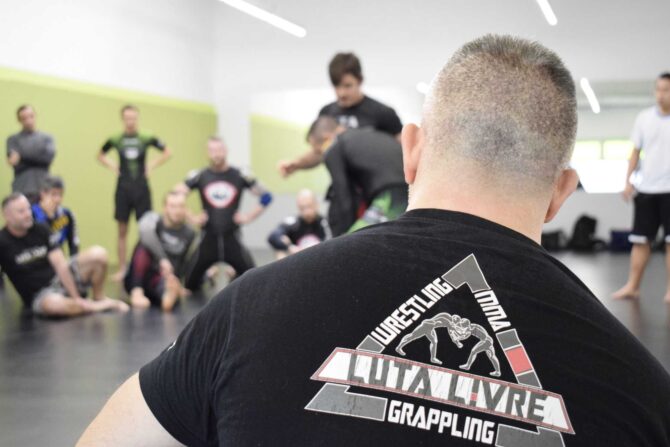 Luta Livre has its origins in the 1920ies

Luta Livre has its origins in the 1920ies in the favelas of Rio de Janeiro, Brazil. Literally, it translates to “Free Combat”. Other than BJJ (Brasilian Jiu Jitsu), which traditionally was a sport trained mostly by the upper class, Luta Livre is practised without a Gi (no-gi). Luta Livre Esportiva allows only grappling and wrestling techniques, while Luta Live Valetudo combines theses techniques with striking and kicks, today mostly referred to as MMA (Mixed Martial Arts). The aim is to take down the opponent, secure a dominant position and submit the opponent in a choke or lock position. In the 1990ies Daniel D´Dane brought Luta Livre to Europe. In the new Millennium, with the rise of UFC as a successful combat sport organisation its popularity grew further. Today many serious MMA fighters train Luta Livre for their wrestling and grappling techniques. KaiGyms own Boban “Bobby” Bozic was the first Austrian rewarded with a Luta Livre Blackbelt in 2011 by Marcio Cromado from RFT Brazil. Recent KaiGym Luta Livre Blackbelts are Georges Kalmar (Austria), Michael Wanke (Austria) and Bohuš Duľa (Slowakia). Oss.