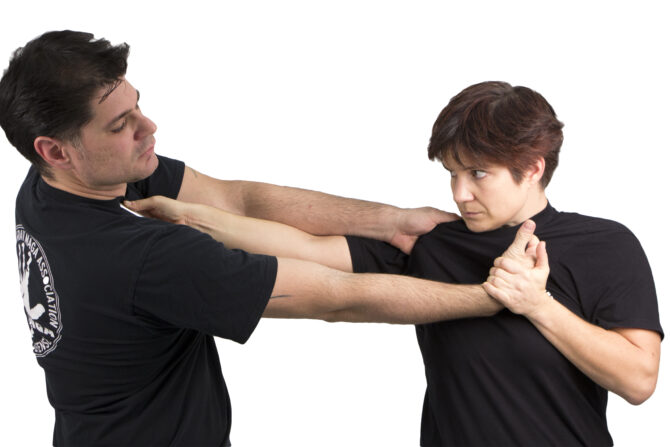 Krav Maga is good for you

Krav Maga is good for you: it trains your brain, balance and coordination, it gets you closer to your fitness goals, you spend time hitting (things with) nice people AND you learn useful self defense techniques. What more could you possibly want?

Krav Maga historically took a tour-de-globe: developed in the 1930ies in Bratislava by Imrich Lichtenfeld, it was imported to Israel during the 40ies. There it was divided into a military and a civil branch. The various myths about secret techniques only used by the military and Israeli counterintelligence have helped Krav Maga to gain a reputation as a potentially lethal self defense technique. (True, of course.) It also gained the reputation of “100 ways to kick somebody in their private parts“. (True as well). The US (who imported it next) helped to market both reputations. Krav Maga then spread around the globe and arrived back in Europe in the early 90ies of the 20th century.

Let’s take a closer look at the origins: Imrich was a professional boxer and wrestler and knew some grappling from his father, who was a strongman at a traveling show and later a police officer in Bratislava. Imrich won several tournaments (boxing & wrestling) and was reputed to be the best European wrestler of his time. He was looking for techniques for people to use to defend themselves against anti-semitic attacks on the street. So he looked at his skills, and from each branch (Stand Up, Wrestling, Grappling) he chose the simplest and most effective techniques and then added skills for self defense: dirty boxing, attacking weak spots, using weapons of opportunity, etc. Which makes sense: self defense is not about winning a fair fight but about getting away as intact as possible from an unfair and often surprising attack.

KaiGym Krav Maga falls perfectly in the historic line: we take the basics of Stand Up, Wrestling and Grappling and add techniques for deescalation and self defense.
You will find traces of MMA, a bit of Kickboxing, a splash of Luta Livre, a pinch of Panantukan, some Kali Weapons tossed in, topped with Cross Fitness exercises and finished off with some good old Krav Maga techniques (like kicking people in their private parts). Voila. Enjoy!